It is important that all attendees of Parramatta parkrun check into our event.

We will display a QR code each Saturday morning at various locations around our event to assist with physical distancing.The QR code is available here and on our Facebook page, so you are welcome to check in before leaving home. 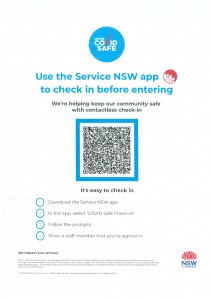 Due to the current COVID situation, we have decided to cancel both the Christmas Day and Boxing Day events.

Please refer to our Facebook page for updates on the events planned for New Year's Day and Saturday 2nd January.

Join us at the usual time of 8.00am for a festive run or walk.

You can start the new year with a run - or two!
Commencing at Parramatta at 7.30am (note the earlier start), you can then travel to Rhodes at 8.45am or Rooty Hill at 9.00am.
This is the only time of the year you can officially record two runs in a day.

Parramatta parkrun 'Christmas Day' edition is back again in 2019.

More information to follow in the weeks leading up to Christmas.

Starting with Parramatta parkrun at 7.30am (note the earlier start) and follow this up at either Rhodes at 8.30am OR Rooty Hill at 9.30am.

It's the only time of the year you can officially record two runs in one day.

Remember, please drive carefully between events, and respect our neighbours at this early hour.

We are having a New Year's Day double with Rooty Hill.

Commencing at 8.00am at Rooty Hill, you can follow this up with a 9.30am run at Parramatta. This is the only day of the year where two runs will count.

Please travel safely if you are going to do the two runs.

This week 175 people ran, jogged and walked the course, of whom 20 were first timers and 27 recorded new Personal Bests. Representatives of 16 different clubs took part.

The event was made possible by 10 volunteers:

Today's full results and a complete event history can be found on the Parramatta parkrun Results Page.