This year we are planning a Christmas Day special parkrun.

we will start at the usual time of 8am.

Runners from all events and first timers are welcome.

We can also provide special “permission slips” if required.

We do hope to see as many people as possible! 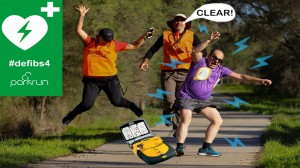 If you've ever wondered how our mobile defibrillator operates or thought it would be good to familiarise yourself in advance, here's your chance. Robert Meacham has kindly offered to run a series of instructional demonstrations to dispel the myths and fears surrounding AED's. They will begin near the finish line of our June 15th parkrun event for anyone willing to observe and will be repeated as necessary to ensure everyone has an opportunity to be involved.
While Canning River parkrun is lucky enough to have a mobile defib, others do not. Please consider visiting this link and donating to support new or less fortunate parkrun locations. 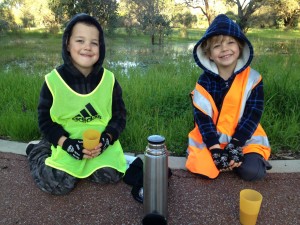 G'day parkies, just a quick reminder that Canning River parkrun's 6th birthday is this Saturday 1st June and we are having an "Australiana" themed event, chucking a few pacers on the course and hopefully celebrating some big milestones. While we have all the volunteers we need to go ahead, there is still plenty of pacer vests available. Please message us to reserve a vest or grab whatever is remaining on the day.
See you's all there for what we're sure will be a big event and great beginning to your weegend

May 5th is pacer day at Canning River parkrun, providing you with an opportunity to test your legs and possibly give that PB Bell a ringing! As always, we are on the lookout for beautiful parkrunners to wear one our lovely, bright vests, so please let us know if you are keen and we'll keep it aside for you. See our Facebook page for event details.

If you fancy a parkrun on Christmas Day or New Years Day we can provide!

On Christmas Day you can parkrun at Claisebrook Cove (Facebook event details), usual time of 8am.

Yes! These are official parkruns, so they will count towards your 50, 100 and 250 tshirts and the end of year points tables.

No! Each parkrun will operate these bonus runs a bit differently but definitely at Canning River parkrun we will not have the full complement of volunteers. Some parkruns will run without marshals and the first finisher may be required to operate the barcode scanner.

Feel free to email any questions you have direct to your chosen parkrun or post them on the Facebook event pages.

There is a twilight freedom run happening at Rockingham on December 30th at 6pm. We suggest running in your swimsuit and then dashing straight into the sea at the end of the run.

In the women's placings Clare Jennings was first female finisher in 21:21, Tracey Horton (WA Marathon Club) was second in 22:34 and Yasuko Osada was third in 25:48.

It was a new PB for both Conroy and Jennings, and notable PB mentions should go to Phillip Rose who knocked 34 seconds off his PB clocking in at 21:29, Laura and Anton Kuhar who came in in 43:22 and 43:21 respectively, both taking over 4 minutes from their previous times, and Morgane and Armelle Davies, who ran 31:15 and 31:16 respectively and both took 1 minute 26 seconds off their previous times.

We had 10 runners in the JW14 category, parkrunning after a sleepover birthday party, and making the largest group of JW14s that Canning River parkrun has ever hosted. It was the first ever parkrun for all of them, and we hope to see them back again very soon.

A large number of the Canning River parkrun family are participating in the City to Surf tomorrow, in distances as varied as the 4km walk, run or wheelchair through to the marathon. We wish all of you a great day.

Just a reminder to all parkrunners that next week we will be hosting a Begone Winter! BBQ after parkrun. Bring your sausages and buns and enjoy waving goodbye to the last vestiges of winter.

The longest parkrun is a "tradition" started in the northern hemisphere when on the day of the summer solstice parkrunners run as many of the parkrun courses as they can.  Of course, when it's their summer solstice, it's our winter solstice so although the weather forecasts were a little sketchy, a band of intrepid parkrunners gathered in the early morning light to start the tradition here in the West.

Although we only have three active parkruns, it was decided we also visit the proposed courses for the two imminent parkruns, making the program: Aveley Park, Joondalaup, Claisebrook Cove, Canning River and Rockingham.  5 events at 5km each meant for 25km of social running; some people chose to attend fewer events but many opted to attempt all five.

Aveley parkrun is scheduled to commence on 6 July.  The course is predominately flat, starting with a lap around the beautiful park and its waterways then following the footpath for a few km then turning back and undoing what was just done.  The longest parkrunners started at a sedate pace, chatting and laughing, but once the course was figured out the pace at the front increased; but this was only the first event of five so no-one took things too seriously.  Of course there was the congratulatory claps and cheers as each runner crossed the line (a gesture which would grow in importance throughout the day).

Joondalup is still in the planning stage and the last time many of the parkrunners had visited Neil Hawkins Park was for the Half Marathon a few months earlier.  Joondalup will be an "unusual" course for it has a net downhill!  We started at the top of the park and headed south on the sealed path before turning north onto the unsealed track which is closer to the lake.  The running atmosphere was still very relaxed, jovial in fact (IMHO) and was thoroughly enjoyable.  Like at Aveley, every runner was given the rock-star welcome as they crossed line.

Many runners have graced the Claisebrook Cove parkrun before, so with very little fanfare, we all just set off.  The 10km already run was starting to show for some people, as did the interval between efforts driving to each location; this highlighted the importance of warming up properly and doing some stretches before and after each effort.  At the end of the run, the applause was growing louder as more support from the sidelines was called upon as the runners climbed "heart-break hill".  As it was close to midday, lunch was taken in the park at the finish, a good time to top up the energy reserves; 15km done, 10 to go.

By the time we arrived at Canning River parkrun, the weather had turned and the cool but sunny conditions became colder and wet.  A little drizzle was not going to dampen our spirits, but heavy showers started to wear thin! (Thin enough that one un-named cut the corner

)  Although the weather may have been a little gloomy, the atmosphere at the finish area was the opposite.

By the time we arrived in Rockingham for the final push, the rain had stopped but it was still cool and the breeze on the coast was considerably stronger than further inland.  Still, we all took our positions on the starting line and headed out for kilometres 20 to 25.  For some, they remained buoyant, for others the distance was telling, but everyone finished what they set out to achieve; some finished more than they thought they could.  After the shouts, claps and cheers brought in the last runners, we retired to a warm venue for some refreshing beverages, hot chips and tall stories.

I had a great time, and although my legs were a little weary the next day, it was well worth the effort.  It might not be too sensible to attempt a longest parkrun on 22 December (our summer solstice) but then again, we're parkrunners and are known to do silly things from time to time, so we'll just have to wait and see?

Thanks go to Jon Storey for making many of the arrangements and letting us know of this northern tradition.