Open events are adhering to the COVID-19 Framework. Please see event pages for information about your local event. 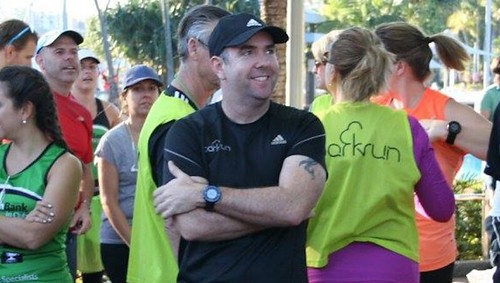 It’s been a big week in the parkrun world, from our first Aussie Event Director reaching five years of service, to a proposal then a baby…. All in a parkrun day!

On Saturday my husband and I attended South Bank parkrun for event number #200 and to join in the celebrations for Gareth Saunders, our longest standing Event Director who has reached 5 years.

Here is a special thanks from Tim Oberg: Gareth launched New Farm parkrun on the 17th of September 2011 and it quickly grew the event to be the largest parkrun in Australia, even as we grew into Sydney and Melbourne. By the one year anniversary of the event it was averaging over 300 runners and 10 volunteers per week, figures that most events struggle to achieve even today.

On the 3rd of November 2012 Gareth launched South Bank parkrun and is of course still the Event Director to this day making him the longest serving volunteer with parkrun in Australia. During his tenure with parkrun Gareth has also served as volunteer Operations Manager, supporting me personally during times of unprecedented growth. Gareth also served as President of our Board for two years, transforming our governance and recruiting a high caliber of Board members around him.

Today parkrun is one of the largest and most successful community sporting organisations in Australia with 185 events and almost 365,000 members. I can safely say that no one person has contributed more to this success than Gareth Saunders and we certainly would not be in the position we are today if it were not for him. Finally, I would like to extend special thanks to Gareth's wife Mel for loaning Gareth to us over the last 5 years. We all know that it really is a team effort and Mel's contribution should not be underestimated."

That message stretches to all our partners, families, husbands & wives, being an Event Director is a team effort, so if you are the other half of an ED, Thank you! 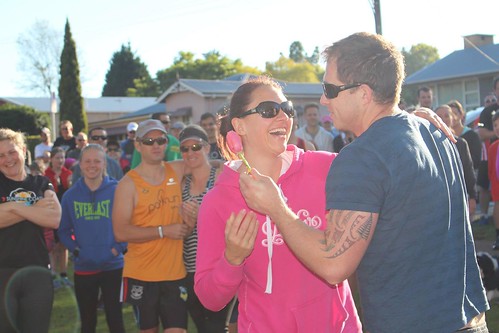 parkrunner James Hogan proposed to his girlfriend Elizabeth Worrall, pictured above at Toowoomba on Saturday, The couple in the background, looking in on the proposal are two Gatton parkrunners who met at parkrun, got married and are having a parkrun baby!    James and I had been going to the same church for about a year but never spoken to each other (even though I'd been scoping him out for a few months before we started dating!). When we eventually started talking James told me about this parkrun he'd been doing (which I'd never heard of!) and invited me to come along the following week with him. He picked me up that morning before the run and I remember the first lap around we would chat casually, getting to know each other, but the second lap was significantly more quiet (both of us were out of breath! We did have a really nice time together after the run though and spent about an hour and a half sitting in Queen's Park, chatting and eating nectarines. parkrun has been great for us, James is definitely more committed at getting up early on a Saturday morning but we've done PBs together and pushed each other along.

Now to the baby… Tony started running Dec 2013 when a friend of his nagged him to sign up for parkrun. Being quite competitive, he was quickly hooked. I started in January 2015 when a friend talked me into signing up for the GCAM half in July. Not realising how silly that was, I agreed and decided to use parkrun as part of my training. Tony and I met in February at our local parkrun (Gatton, where Tony is now a run director), and started dating shortly after GCAM. I'd love to say we spent a lot of time running together while we were dating, but he's way too fast for me. It's nice having someone cheering you home though! On a trip to New Zealand to meet each other’s families we enjoyed playing tourist at Western Springs parkrun. Tony proposed in March this year, just before heading to Canberra for the half marathon (and of course Ginninderra parkrun). We married at palm cove in late August (sneaking in a Cairns parkrun!), and were also able to announce that I was 13 weeks pregnant. We weren't able to keep this a secret for long at parkrun, as our friends quickly noticed my times slowing and the stops to accommodate my nausea!

We are looking forward to continuing our active lifestyle (planning our holidays around parkruns) and I joke about adding an extra line to the volunteer sheet for anybody wanting to push the 'parkrun baby'! It's also very comforting to know we have this wonderful extended family within parkrun. We're both extremely grateful to parkrun, as I can't see how we would have met otherwise. 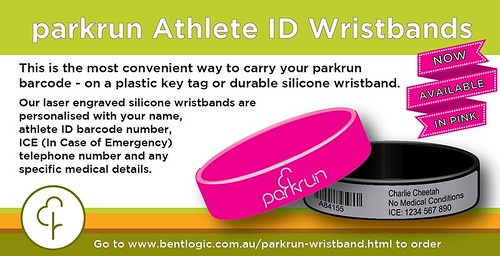 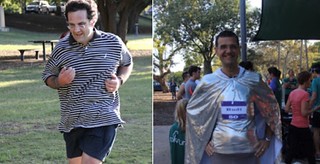 how parkrun has improved my life

On Saturday, I ran my 50th parkrun. After being obese for nearly my whole life, I shed over 60kg in 2015 and 2016, and my health and fitness are the best they’ve ever been.

parkrun has been an integral component in my transformation, because it helped change the whole way I looked at physical activity — not as a dreaded chore, but as something to enjoy and look forward to. When I was dragging myself to the gym for mind-numbing sessions on the treadmill, I relied entirely on willpower and routine to keep me going: there was no pleasure in it whatsoever. I’m glad I didn’t have to find out how much longer I could have done that before willpower inevitably ran out.

I didn’t love running straight away: that took a few months. Before that happened, parkrun supplied two other important sources of motivation. First, parkrun gave me a sense of achievement and self-improvement that was far more powerful than anything I ever got on a treadmill. Second, the welcoming and inclusive atmosphere at New Farm parkrun made me feel like I had been accepted into a real community: it soon felt like home.

Eventually the bug did bite, and I started to love running. From there, 10km events and half-marathons soon followed, and I plan to tackle my first full marathon next year. I couldn’t even have imagined this at the start of last year. I don’t recognise myself, outside or in!

My 50th parkrun is an important milestone to me because it tells me that this is a lasting change in my life. So thank-you, New Farm parkrunners, and especially the events team. You’ve built an amazing community and my life is so much better for being part of it!

To pay it forward, I make an effort to say “hi” to new faces and ask them how their run went: I know it can make a world of difference! 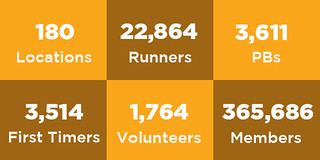 feedback from the field 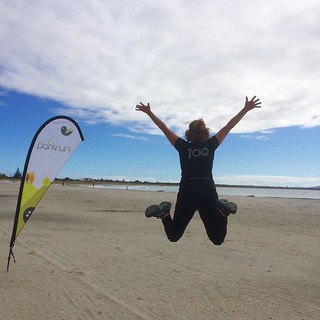 Recently both Madison McAuliffe (9) and Alex Langford (6) completed their 50th parkrun. To celebrate this milestone, it was announced in the school newsletter and 15 kids from Riverton Primary School attended. The sports teacher Mr Brooks who travelled 40 mins also attended along with the Principal Mr Grundy. It’s great to see teachers and so many children attend and support their peers. 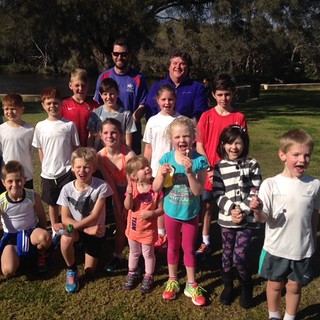 Thanks to everyone who suggested Mt Clarence as the place to run whilst travelling WA. I ran my 100th parkrun with my daughter! Such a stunning run and friendly parkrun community. Thanks to the run team and volunteers today - those mountain inclines really tested my holiday legs! A far cry from the super flat home run of New Farm in Brisbane. 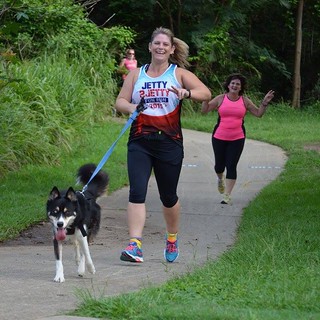 Hi, my name is Reacher and I am a husky cross, which makes me adorable with 2 different coloured eyes. My human’s daughter picked me up on the side of the highway one night because she didn’t want to see me hurt, such a lovely human.

They did find my humans owners but it was ok for this family too keep me. I love my parkrun Saturday and if my human is volunteering and I can’t go I cry like the big sook that I am. I get very excited when we arrive and whimper with excitement to say hi to everyone.

I drag my human for the first 200 meters until I need to stop and relieve my excitement, well known for this, then I am off again. I know where the water stops are and I get very competitive when other humans or dogs pass us and try to take off in another direction when I see a bird, that bird is mine!

My fastest time is 28:46 and I know I can go faster, I have done about 25 parkruns now, I am up to 15km and hoping to complete a half marathon with my human soon. I do think my human is weird when she does random jumps when we run, maybe I should learn to do them too. I love the attention and bacon that I receive at breakfast from all the volunteers and friends after our run each week. 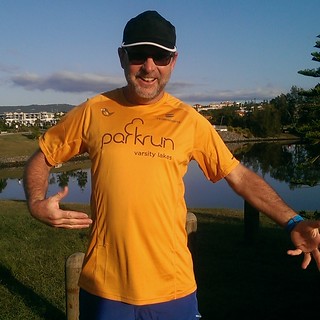 Favourite volunteer role - I don't really have a favourite role. When I write my name down to volunteer, I usually write down 'whatever'.

I volunteer at parkrun because - Pretty simple really. No volunteers, no parkrun. I get a lot from parkrun so I'm happy to return the favour.  Over the last five years I've missed nearly two year’s worth of parkruns due to work, so to volunteer every now and then is no big deal. And you can volunteer five times in one year and still get fifty runs, Weather permitting, and take advantage of the Christmas Day run and the New Year's Day double up.

One thing I love about parkrun is - Its consistent, every week is good. If you run at your home event or be a tourist at another.

My most memorable parkrun moment was - There's not one moment that stands out. But I do get a big kick out of helping someone get a PB, usually a junior runner. Realising that they can push way outside of their comfort zone. I can't keep up with a few of those kids now.