Open events are adhering to the COVID-19 Framework. Please see event pages for information about your local event.

welcome to the newsletter

In this week's newsletter we hear about a parkrun proposal, the great man PSH has some major news re our 10th birthday later this year and Suncorp Bank invites you to runPositive.

It’s been another epic weekend for parkrun both here and abroad. Let’s get into it...

Firstly, here on home soil we witnessed another first at Newy parkrun… our first finish line Marriage proposal!!! A very speedy Nick Marriage (yes that is his real surname) crossed the line as first finisher in 16:50, proceeded to hastily change into a suit, before getting down on one knee and proposing to Maddy Herbert as she crossed the finish line in 20:37! And she said YES! Congrats Nick and Maddy, I assume a spot of parkrun tourism will be on the cards for the bucks / hens / honeymoon? 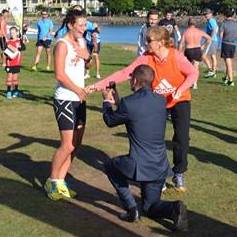 Secondly, over to South Africa where Bushy parkrun’s all time global attendance record of 1,184 was smashed by Modderfontein Reserve parkrun in Johannesburg who saw an incredible 1,803 barcodes scanned on Saturday!!! This huge turnout had been somewhat expected as the day had been heavily promoted as a celebration of World Move for Health Day. Modderfontein Reserve parkrun Event Director Wayde Morsink personally made an extra 2000 barcodes by hand and had them laminated in preparation, just shows the commitment of a parkrun ED! A few words from Wayne –

“This was a massive team effort by so many people who bought into and believed in making the 10th May 2014 a special day for everyone. We were blessed that everything fell into place so nicely. Thank you Gill Fordyce for your constant support over the last few weeks leading up to what will probably go down in parkrun history for many parkrunners as their most memorable parkrun, but certainly not their quickest. And thanks Bruce Fordyce, it's been an amazing journey working with all you guys, with everybody standing up and being counted on the day.”

Lastly, I received a Tweet a couple of days ago showing me the below billboard in Moscow. Many of you may not even be aware that parkrun is now up and running in Russia and from the looks of this sign it won’t be long until they are chasing Modderfontein Reserve’s attendance record! 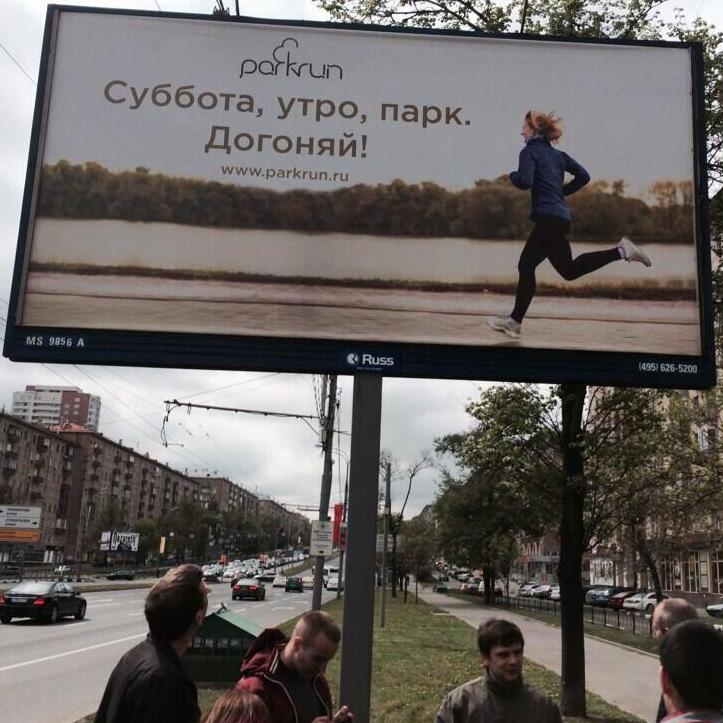 Tim from parkrun Australia (get in touch)

Were you a first timer last weekend, or did you run a personal best? We would love to hear about your experience on email, @parkrun_au or on Facebook.

On the 2nd October 2014 we will be ten years old. On that day it will be exactly ten years since the first ever parkrun took place when 13 runners met up for a jog around Bushy Park.

Our aim is that every parkrun and every parkrunner will join us by celebrating this anniversary at their ‘home run’ on the 4th of October 2104. We are hoping for a birthday celebration starting in New Zealand and following the sun until it culminates in the USA later that day.

But that seems quite a long time to wait and so we want to invite all parkrunners to get involved in this celebration now by helping us to produce a permanent visual reminder of what we have achieved. Our wish is to produce a coffee table photo book totaling about 88 pages with many photos provided by you that will be available for sale by Christmas.

To take part in this initiative we will place a new icon on every parkrunner’s profile page (your link is available on the top right-hand column of this newsletter) which when clicked will take you to a web page allowing you to submit 3 images plus some text.

The webpage will offer you some guidance of what categories of images we are looking for plus some idea of the quality we are looking for. You will only be allowed to submit three images so please be careful when choosing your contribution.

I am very excited about this project. It is the parkrunner and the parkrun volunteer who form the essence of what parkrun is all about and now is your chance to be immortalised in this historic book. 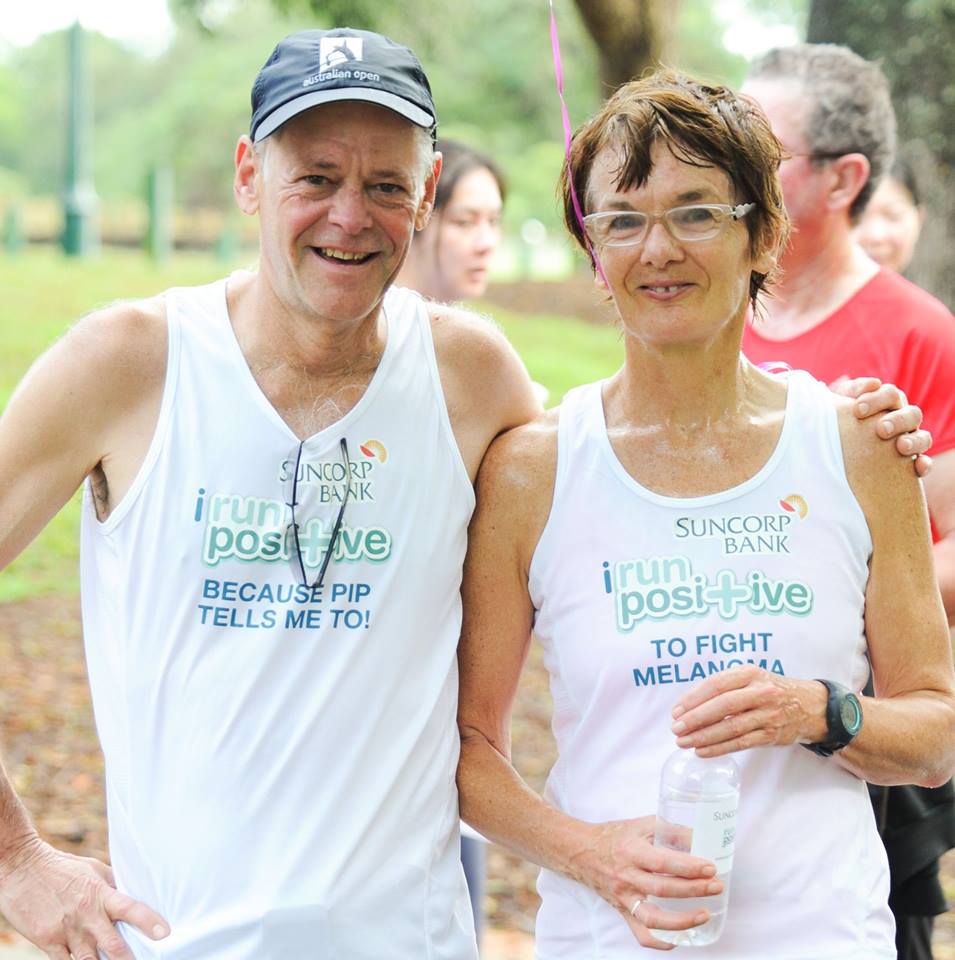 Suncorp Bank’s runPositive program kicks off today and parkrunners are encouraged to enter!

The program, which some of you may remember from last year, celebrates and supports all the reasons we run and you’re invited to join the online community of fellow runners – giving you the chance to share your reason, a chance to share in $9000* plus Suncorp Bank is offering you a free runPositive parkrun Australia singlet. Numbers are strictly limited, but how great would it be wearing your own parkrun singlet during training?

Plus if you’re registered to take part in either the Gold Coast Airport Marathon, The Sunday Mail Bridge to Brisbane or Blackmores Sydney Running Festival you could sign up for a free breakfast at the race in the Suncorp Bank Marquee.

So many great reasons to join this inspiring and motivated community of runners from across Australia. 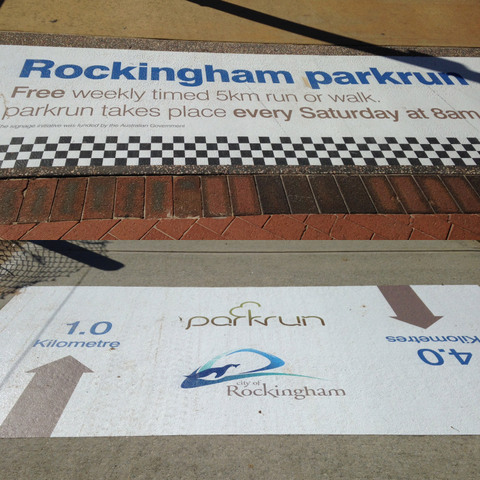 In last week’s newsletter there was an image of the new permanent signage that has been put in place at Rockingham parkrun by their local Council (see above). We had a number of queries by parkrunners as to how this came about so here are a few words from Rocking parkrun Event Director Claudia Wells -

“We have a Manager from the Community Infrastructure Planning Department that runs regularly. The council had some funding to put signage in at other community locations, and he suggested the signage to us to be put in at the same time. It is called Earthwrap. It is made from aluminium, so as well as being durable, if/when it is no longer required, it can be peeled up and recycled! As well as the start/finish line, we have the distance markers, as well as small markers on fence posts and ones with just the parkrun and council logos on them along the course. It was all installed a couple of days prior to our first anniversary, and we had the Mayor there on the day for an official unveiling. The Council has been very supportive of Rockingham parkrun, as they are very proactive in providing programs and equipment for fitness and wellbeing. The feedback from our regular (and not so regular) crew is that they look great, and make a huge difference to how they feel when they run.”

Feedback from the field

Ashley van Vuuren - About 10 years ago, I stopped walking for fitness after a very emotional divorce and move out of my hometown. This year, by accident, I started again and registered with parkrun. My PB was only 63 minutes but hey, I am an optimist! Every step I take is a step closer to a better PB! Thanks to all the volunteers and to organisers of parkrun. I am sure I will be volunteering in the near future.

Michele O'Brien - What a blast at Saturday’s New Farm parkrun! First cool run of the year, met some new friendly people, cracked up laughing at the antics of friends I have met at parkrun and now value highly and found a local running partner! So grateful I jumped out of bed on that cold morning!

Don Hannan – Re the Claisebrook Cove parkrun course video, I think there should be more of these video's to showcase the variety of parkrun locations. I'm from Queensland (Sandgate is my home run) and I was recently in Perth and did the Claisebrook Cove parkrun, it was awesome to view a video of the course and relive the run without the body stress. It is a beautiful setting for a parkrun with the Swan River as company and, as with all parkruns that I have done, the organisers, volunteers and runners were sooooo friendly. The finishing stage through Claisebrook Cove is spectacular and reminds me of Paris, the coffee after the event is pretty good as well. Any interstate parkrunners visiting Pert should try to get along to this event, remember though that in the West they start them at 8:00am

Carole Hooper - I participated in my first Newy parkrun last weekend in a time of 38.32. I was very impressed with the Newy course and also the organisation on the day and the friendliness of all concerned. I'm 66 and hope to participate in many more in the future and maybe better my time. I think parkrun is a great concept and will certainly be encouraging my friends to join. Thanks to all concerned in Newcastle.

Michelle Sparkes - I joined the Rockingham parkrun back in October 2013, I had never run in my life and after completing the Couch to 5K (C25K) app I used parkrun as my
first official 5km run. My 6 year old son Jack came along and finished 6 minutes ahead of me! Since then I have been a regular at Rockingham, both as a runner and a volunteer. My other son Alex, who is 5, kept begging to come along. I put him off as long as I could, since he couldn¹t even manage a 1km walk to school without whining. Two weeks ago I relented and took him along to his first parkrun. Whilst there were a few tears and a fair bit of whining, he completed the course in a respectable 38 minutes. He surprised me when he leapt out of bed last weekend and couldn¹t wait to go to parkrun again. This time there was less walking and less whining ¬ in fact he ran from the 2km mark all the way to the end, at a pace that had me struggling to keep up with him, and finished in 33:12! Meanwhile my 6yo also got a new PB of 28:11 finishing first in his JM10 category. I am so proud of my boys and I have Rockingham parkrun to thank for it. I look forward to parkrun becoming a regular part of their lives as it has become a part of mine and it is great for us to achieve it all together. A big thanks to Claudia, Scott and all the volunteers in Rockingham, as well as Rockingham City Council who are fully behind the event and have provided permanent signage along the awesome Rockingham parkrun course 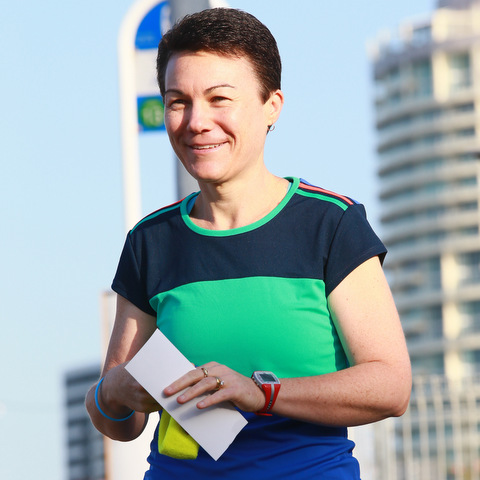 Favourite volunteer role:  Token Scanning, but really anything except for time keeper - Renee Leslie does a great job of that! It scares me

What do like about volunteering at parkrun:  Great people - everyone is appreciative and friendly.

Most memorable or funniest parkrun moment:  No one specific thing - every week there is something positive, whether it's all the kids that join in, people attending for the first time or achieving a PB - it's all good!

How can we improve parkrun:  I don't think you can - it's easy to get involved - just put your hand up! It's not hard, and it just helps to keep this free event going. 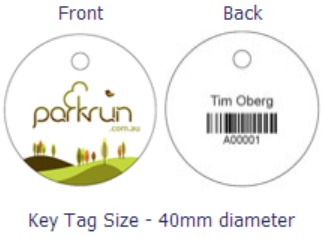 Do you have a question about parkrun? How do I collect my club T-shirt? How do I get my barcode? All your questions are answered on our brand new support site

We ask every parkrunner to volunteer 3 times a year. When volunteering you receive the maximum number of points towards the yearly competition.

All children under 11 must be accompanied by a parent or guardian. Guardians must ensure that children place themselves appropriately so as to prevent a situation where they are being repeatedly overtaken at the start. This is to ensure the safety of your child.

adidas has been focused on athlete's performance since the first running spikes were made in the 1920's earning the first Olympic gold medal in adidas shoes. Today, adidas is proud to be supporting parkrunners everywhere. Explore adidas running