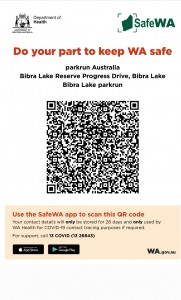 SafeWA check in now mandatory at Bibra Lake parkrun.
Please check in before or after the event using this QR code.

Sorry we won't be hosting a parkrun on 25th December or 1st January, see you on 26th and 2nd instead!

To start 2018 off right, we are holding a special New Year's Day parkrun at Bibra Lake. Same course, but different starting time: 9:30 am. That way you can double up and parkrun at one of the parkruns that are starting earlier.

See you on New Year's Day!

A fantastic turnout this week considering so many parkrunners had made the trek south for the Busselton half Marathon this morning. Congrats to all who participated - we hope you enjoyed yourselves.

It was my first parkrun as Run Director and I was feeling a little nervous - especially about the briefing... thankfully it all went well and I didn't forget to say anything.

Today's run went smoothly - as asked for in my pre-run briefing. Thank you!!! We had another great turnout of first timers to Bibra Lake and a total of 60 PBs. Well done to all who achieved a PB! We had some fantastic volunteers who all did a great job.

First across the line today was Nic Taylor in a time of 18:19 and first for the women was Rebecca Brown in a time of 22:25. My Co-Event Director, Chris, finally got his first run in at Bibra after Run Directing for the first two weeks and finished in a time off 20:36.

I met so many wonderful, postitive people today, including a lovely couple visiting from Geelong. It's great to see our little parkrun community growing and thriving.

No photographer volunteer this week but I did manage to get some questionable photos via my iPhone.

Looking forward to next week!!
Rachel

After several months of deliberating and waiting, we finally got to the big day ... Bibra Lake parkrun. This was my first actual Run Director (RD) gig as well - nothing like jumping in the deep end, I suppose.

I dragged my family down to Bibra Lake around 6:40am on Saturday morning (well, that was the plan). At 6:50am I belatedly starting a quick lap to get the marking cones down. I was running a bit late by the end, but there were already a few familiar #parkrun faces appearing. Rachel turned up a bit early (thankfully, made up for me being a bit late!) and set the flags up, I had a very quick briefing with my volunteers - handily I had a lot of other support from other experienced parkrunners at this point - and then it was on to the pre-race briefing.

Everything then seemed to happen pretty smoothly - we had no incidents; Kim Thomas lead the pack around for an initial men's record of 17:17; and Cait Jameson dropped out a casual 19:58 for the ladies.

There were some very minor data issues (a few unreadable barcodes, and one athlete with a missed token scan) - a little bit of detective work required, but for the most part, it just went to plan. Again, experienced runners (too many to name, you know who you are!) stepped in and assisted without any prompting or fuss. I didn't really have to do much after that. I'm sure that won't always be the case! Very much appreciated. I like to single out Tegan Towie, who stepped in to assist with finishing tokens, and good luck with the upcoming Dawesville parkrun.

We ended up with a fantastic turn out - 292 runners (we only have 300 tokens to start with, so things could have gotten very interesting after that!).

Thanks again to our sponsors - the City of Cockburn, Stocklands and Suncorp bank - for allowing us to make this happen.

This week there were 292 runners, of whom 273 were first timers and 0 recorded new Personal Bests. Representatives of 18 different athletics clubs took part.

Bibra Lake parkrun started on 24th January 2015, and since then 274 different runners, including participants from 18 athletics clubs, have completed 292 runs covering a total distance of 1,460 km, and there have been 0 new Personal Bests.